Join Date: Oct 2013
Location: Sacramento, Ca. Area
Posts: 116
67 Chevelle Step by Step Alternator upgrade
Is there a post for a 67 Chevelle up grading , from stock to high amp output regulator? don't need to know how it works, Just what someone that did and it works great! I've heard you could remove existing regulator near radiator and some wires? I added Fitech FI, electric fuel pump, AirRide air compressor, Stereo and amps, HID head lights, dual electric fans, trans electric fan. what's the best one wire regulator and what's the highest amperage should I shoot for? thanks for reading and any comments.
ChevelleBdC is offline
Quote Quick Reply
post #2 of 8 (permalink) Old Sep 10th, 19, 2:11 PM
Jim Streib
Senior Tech Team


Join Date: Oct 2003
Location: Saint Louis
Posts: 1,182
Re: 67 Chevelle Step by Step Alternator upgrade
I would do a google search for what they call the "Big Three Upgrade" and it shows upgrading the connections between a new higher output alternator, the battery, and then the grounds.

Keep in mind too on an upgrade with you adding things such as the fuel injection, electric fuel pumps, air ride compressors, stereo amplifiers, and such is normally these get grounded to the body of the car so it is important to upgrade the ground side of things.

As far as what is the highest amperage you should shoot for is an unknown. Different electric fuel pumps draw different amounts of power, dual electrics fans, the same as these can vary from brand to brand, so you need to gather the amperage demands of what you are running and then size the alternator. Also keep in mind that the air compressor might not always be on when the fans are and then current demands are lower but when both are on, the demands are higher.

Depending on ones needs, multiple alternators can also be run. Some of the car audio people are running crazy numbers of alternators and batteries to keep up with their demands.


Join Date: Oct 2013
Location: Sacramento, Ca. Area
Posts: 116
Re: 67 Chevelle Step by Step Alternator upgrade
Thanks Jim, helpful info on what to think about. will add up amp draw and add a little for the alternator I choose. what about by passing the original Relay ? any concerns with all those wires going in and out of it? thanks again !
ChevelleBdC is offline
Quote Quick Reply
post #4 of 8 (permalink) Old Sep 11th, 19, 1:27 PM
Jim Streib
Senior Tech Team


Join Date: Oct 2003
Location: Saint Louis
Posts: 1,182
Re: 67 Chevelle Step by Step Alternator upgrade
Keep in mind that if a device has a 30A fuse does not mean it will be pulling that power when it is operating. The device may have a 30A fuse on it's power wire and when started it may pull let's say 30A for a short time but then settle down to a continuous 20A draw or possibly 15A.

As far as bypassing the original relay, this relay serves two functions in that one the relay is for the horn circuit and without it the horn would not work unless a horn relay was added elsewhere. The second function of the horn relay is it acts as a buss or connection point in that there are two terminals on the bottom and on most cars have two wires going to this bar. One could have a wire under each screw or both wires under one screw with nothing under the other screw. Some cars will have additional wires on this buss and are for options like AC, underhood light, ammeter leg, and such.

You might have to refer to a wiring diagram but I believe off of the battery positive post you have a 14 gauge fusible link going to a junction block then off of that a 10 gauge wire that in the loom splits with one leg going to the original alternators output stud, another leg going to the horn relay buss, and the third leg to a small fusible link to one of the 4 connections on the original alternators external voltage regulator. Off of the horn buss is a 16 gauge fusible link connected to a 12 gauge wire that then goes to and through the firewall bulkhead connector. SO, if you do some rewiring and changes, keep in mind how the fusible links are in place and on what gauge wires to protect things.


Join Date: Sep 2009
Location: Parker, Colorado
Posts: 1,208
Re: 67 Chevelle Step by Step Alternator upgrade
There used to be a step by step post on this site to get you where you need to go. Do a search and it should pop up. Used it on mine years ago with no issues. I have electric fans, EFI, Vintage Air, Etc. The only issue was I used a lifetime guarantee alternator from AutoZone and have had to replace it 3 times due to failure. The current one has been good for the past 4 years.
"If you're not living on the edge, you're taking up too much space" - Jim Whittaker


Join Date: Oct 2013
Location: Sacramento, Ca. Area
Posts: 116
Re: 67 Chevelle Step by Step Alternator upgrade
Thanks Bros, I went with the Powermaster 57297-104, 150 amp, tear drop, black with serpentine 6 groove pulley. Talked to John at Powermaster, was real knowledgeable and experienced on what I needed to know. Told to run from alternator straight to starter +, or Battery, and eliminate old regulator. Upgrading all wire size to 4 ga. The only thing I'm not sure of is the power to the horn relay. Will it still have power to it? will keep you updated on install thank you for all your input and support.
ChevelleBdC is offline
Quote Quick Reply
post #7 of 8 (permalink) Old Sep 12th, 19, 6:53 PM
Jim Streib
Senior Tech Team


Join Date: Oct 2003
Location: Saint Louis
Posts: 1,182
Re: 67 Chevelle Step by Step Alternator upgrade
While I do not have a 67 Chevelle wiring diagram, below is how I would modify a 67 Nova setup. 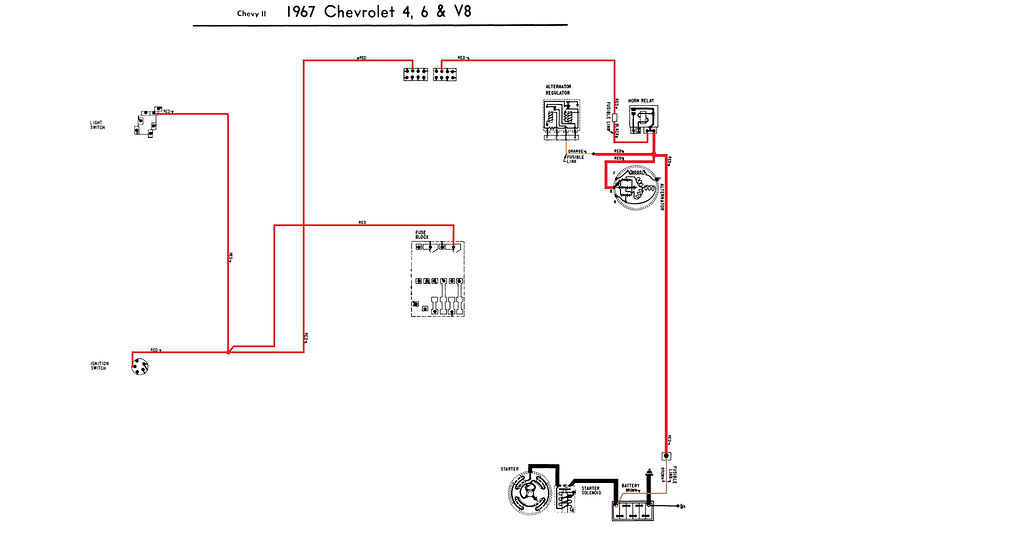 Same as above but just condensed some so one can see things better: 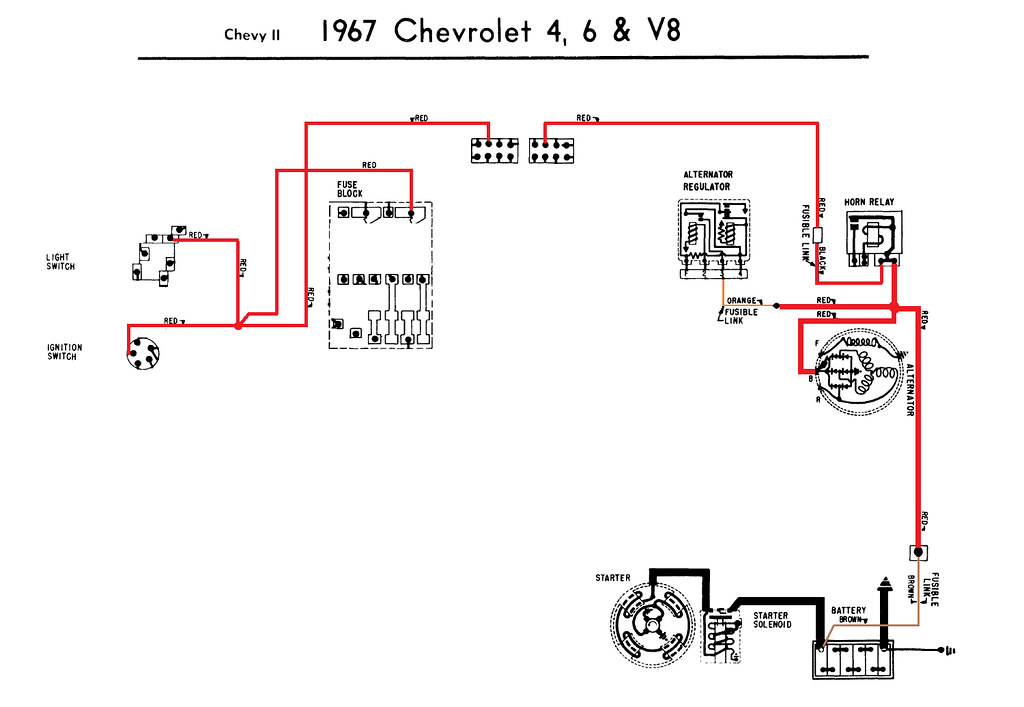 Now the original feed wire from the junction block by the battery going to the alternator output post, the original external voltage regulator, and the horn relay buss is removed: 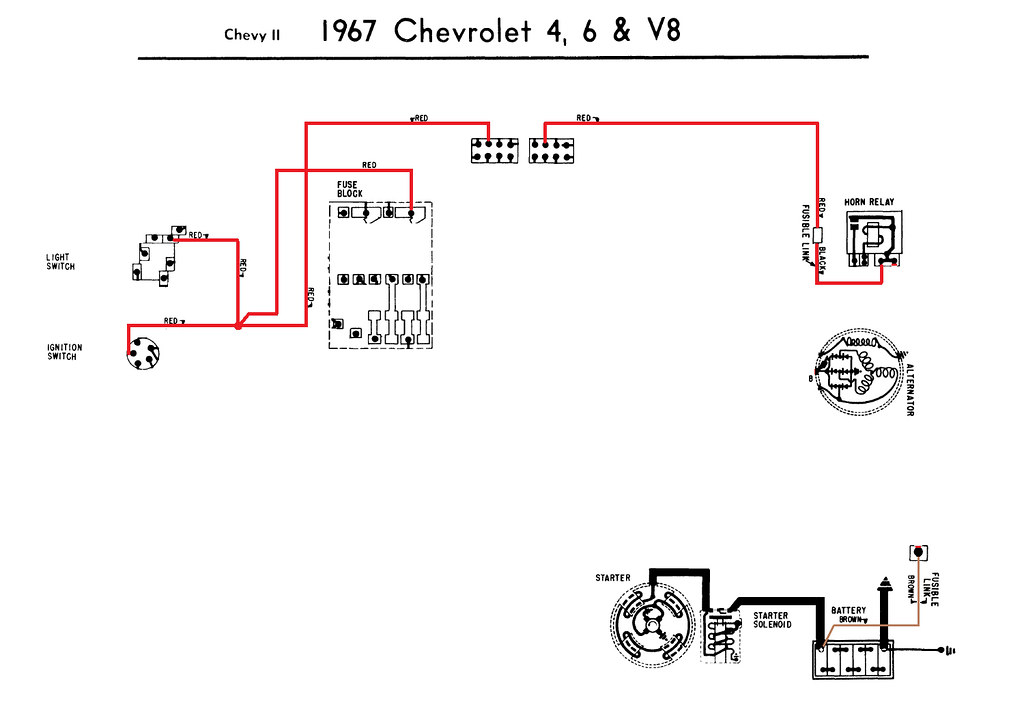 Now a new 10 gauge wire needs to be run from the junction block by the battery to the horn relay buss. Notice too that I have kept in place the fusible link between the junction block by the battery and the one end of the new 10 gauge wire for protection as well as leaving the next fusible link off of the horn relay buss going to a smaller gauge wire that then goes to and through the bulkhead connector: 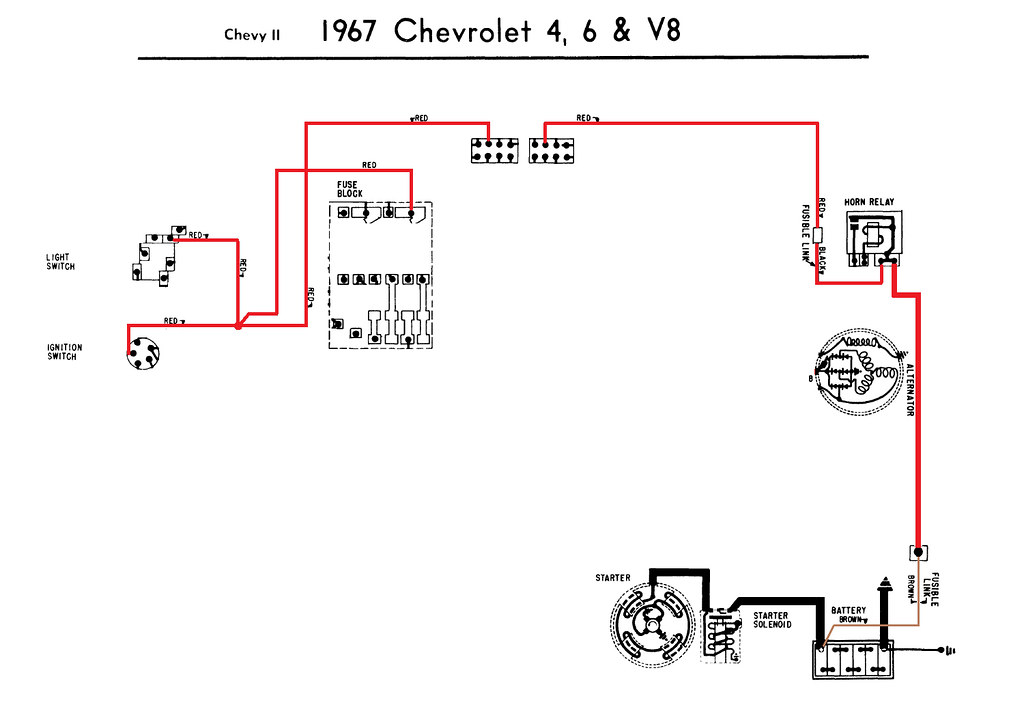 NOW, I then remove the original ground cable and wire from the battery negative post to the engine block and the back of the radiator support: 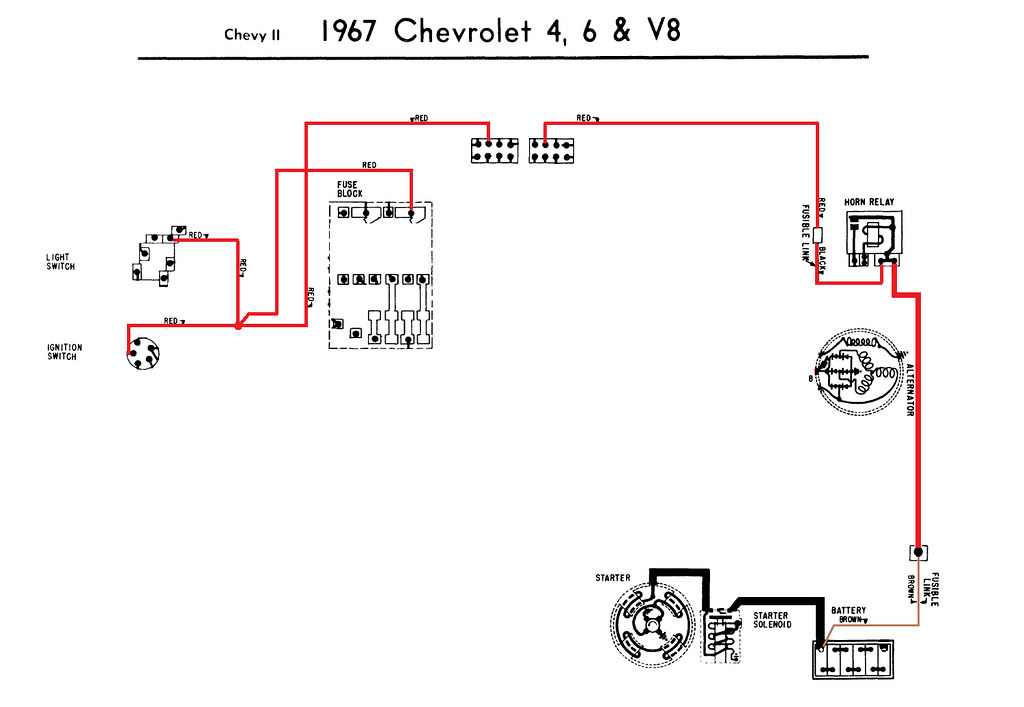 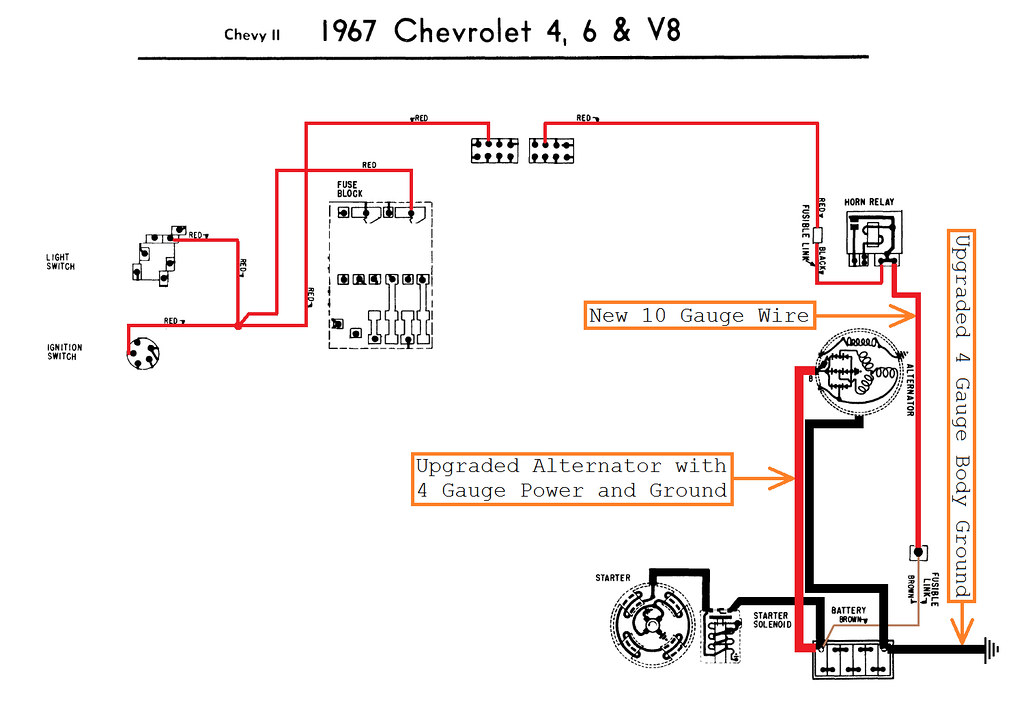 Now to add your added accessories such as an electric fuel, electric cooling fans, air ride compressors, audio amplifiers,and such these would then get main power from the battery and going through the proper wire protection device:

This put my mind at ease and leaves no doubt in my mind. straight forward and to the point. with "must-do" upgrades. Thank you. and your Forum and Team. Thanks again.
ChevelleBdC is offline
Quote Quick Reply