Join Date: Aug 2019
Location: Hillsboro, Or
Posts: 21
BBC valve train troubles
I'm in the process of putting on a new manifold and Holley Sniper on my 468 when I found some of my rockers are offset and wearing bad. I don't know what's causing them to sit off to one side. It almost looks like the valves are sitting wrong or the retainers aren't correct. They are 346286 heads and appears to be stock rockers. What can I do to correct this before it gets worse. I attached some pics, hopefully someone can see what's causing this. 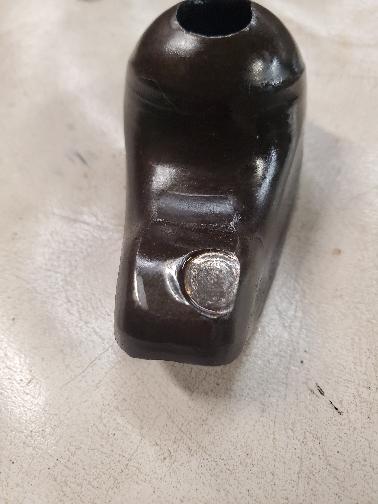 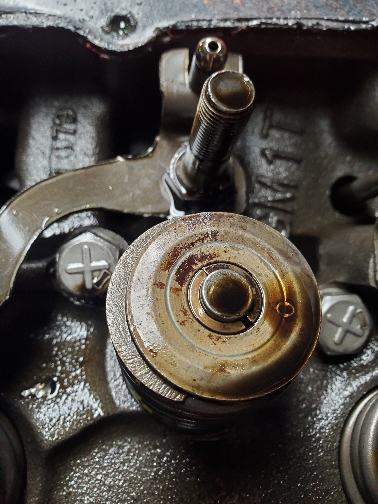 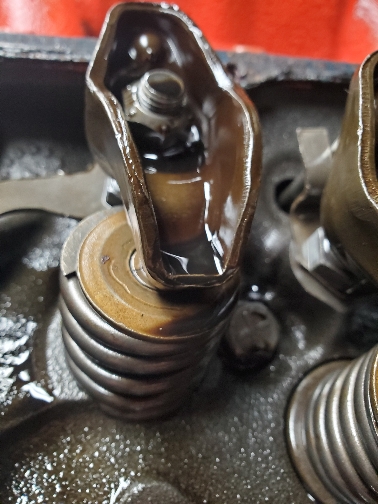 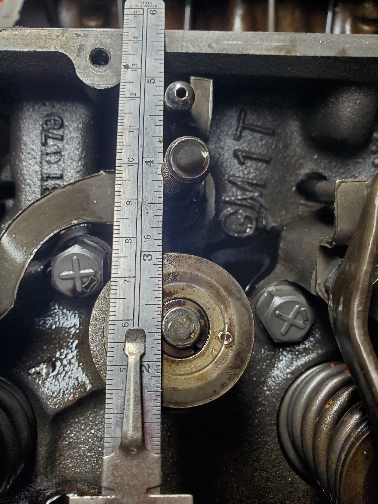 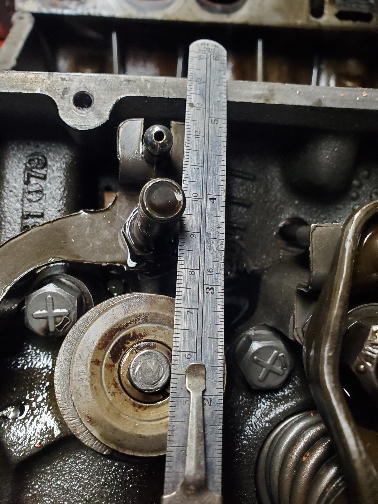 
Join Date: Sep 2000
Location: Buffalo NY
Posts: 15,095
Re: BBC valve train troubles
Gee-ma-neez.. at first I was going to say the guide plates need repostioned to line up the pushrods better, but the more I examine the pictures the more I see that looks un sat. Don't like the way the retainers look or are positioned either. Of course , the rockers are junk.


Join Date: Sep 2018
Location: New Jersey
Posts: 140
Garage
Re: BBC valve train troubles
Agree with 427, guide plates are "probably" correct but I've seen crazier things before. Those valve springs hanging off the retainers don't look good at all. I have a feeling those heads will be coming off.
By the way what fuel pump are you going to run with the Sniper? The in tank one?


Join Date: Aug 2019
Location: Hillsboro, Or
Posts: 21
Re: BBC valve train troubles
I'm not sure where to start, it does look like the valve springs are incorrect causing some of my problem but the valve stem, rocker stud and push rod don't line up either. Maybe incorrect guide plates?


Join Date: Aug 2019
Location: Hillsboro, Or
Posts: 21
Re: BBC valve train troubles
Quote:
Originally Posted by Volks View Post
By the way what fuel pump are you going to run with the Sniper? The in tank one?
I went with the Holley in-tank return-less, that was the easy part of the install.

Really don't want to pull the heads but that's what it's looking like. I just need to know the cause of this before proceeding.
NorthPlainsDrifter is offline
Quote Quick Reply
post #6 of 35 (permalink) Old Feb 7th, 20, 10:27 PM
jeffs68
Tech Team
jeff


Join Date: Sep 2018
Location: New Jersey
Posts: 140
Garage
Re: BBC valve train troubles
So if your guideplate is wrong its pulling the pushrod to the left. If the the guideplate is removed can the pushrod go any further to the right before it hits the head? Still have to address the valve spring and retainer problem though. Like to see what happens when you pull that valve spring off.

Did you have it running with the Sniper yet?
Volks is offline
Quote Quick Reply
post #8 of 35 (permalink) Old Feb 7th, 20, 11:02 PM Thread Starter
NorthPlainsDrifter
Scott


Join Date: Aug 2019
Location: Hillsboro, Or
Posts: 21
Re: BBC valve train troubles
Quote:
Originally Posted by Volks View Post
Did you have it running with the Sniper yet?
I just started pulling everything apart, I'm installing a Performer, Sniper, and Hyper spark ignition, that's when I pulled the valve cover and noticed my rockers. Kind of threw a wrench in my plans for a quick install! At least it's still cold and wet here so I can't drive in anyway.

I think I'll pull the guide plate and see how it all aligns up, then pull a valve spring and see what's up with them. I bought the car this last summer and it ran great, sure am glad I found this before it got worse!
NorthPlainsDrifter is offline
Quote Quick Reply
post #9 of 35 (permalink) Old Feb 7th, 20, 11:07 PM Thread Starter
NorthPlainsDrifter
Scott


Join Date: Aug 2019
Location: Hillsboro, Or
Posts: 21
Re: BBC valve train troubles
Quote:
Originally Posted by 427L88 View Post
Have a valve spring compressor? I can send you a Lisle on engine one to borrow if not. You may need it.
Thank you very much for the offer! How does that Lisle work? Do you need some kind of spring compressor to re-install? Hoping to keep the heads on if possible.
NorthPlainsDrifter is offline
Quote Quick Reply
post #10 of 35 (permalink) Old Feb 8th, 20, 12:27 AM
paul bell
Senior Tech Team

Tell us a little more about this engine, miles, what cam, any modifications?

I'd highly recommend new valve springs, retainers and locks and while they're apart, new valve seals. Get a nice matched set of springs for your cam. Roller tipped roller rockers will do nicely too, get steel ones, not aluminum.

Most people put air pressure in the cylinders to keep the valves from dropping in when you take the springs off. A better idea I used was pull the plugs and, with the piston around BDC, poke into the plug hole about four feet of 3/8" nylon rope then rotate the crank until it stops. The piston will be pressing the rope against the valves.
LS1tech.com supermoderator.
How may I help you?
1971 Monte Carlo SS454-496ci 600hp
1999 Trans Am-500hp
2003 Iszu Ascender XL Limited V8


Join Date: Aug 2019
Location: Hillsboro, Or
Posts: 21
Re: BBC valve train troubles
Quote:
Originally Posted by paul bell View Post
Tell us a little more about this engine, miles, what cam, any modifications?
Unfortunately I don't know very much about this engine as I bought the car this past summer, I was told it is 79' 454 bored to a 468 and rebuilt about 5 years ago with less than 10k miles on it, I think it has a mild cam as there is a little lump in the idle, other than that it is stock from what I can tell. Again, not sure what springs were used on the valves.


Join Date: Jan 2019
Location: Atl
Posts: 103
Re: BBC valve train troubles
you say some of the rockers-is the problem with the intake valve or both? need to take the pushrod out and examine them for interference or bending, makes no sense for stock heads and guideplates to have this problem-maybe serious milling?
427L88 likes this.
pbcbob is offline
Quote Quick Reply
post #13 of 35 (permalink) Old Feb 8th, 20, 9:40 AM
BillK
Super Mod


Join Date: Aug 1998
Location: Waldorf Md. USA
Posts: 12,213
Re: BBC valve train troubles
I know you dont want to hear this but you might as well stop wasting time and just pull the heads right now. That one valve tip is beat to death and I am sure the rest of them are the same way. It is probably worn through the tip hardening. I have seen springs worse than that but it still doesn't make it right. The guide plates are probably a lot of the problem but it has gone too far to just move them.

Pull the heads and get them fixed properly. And I am not saying that because I own a machine shop


Join Date: Feb 2006
Location: Connecticut
Posts: 6,980
Garage
Re: BBC valve train troubles
I've never seen a valve retainer sit so far off center with a spring and the position of the push rod coming up out of the guide plate is whats offsetting the rocker to the side. Maybe the guide plates have a big enough mounting hole that they can be adjusted to put the pushrod more on center. How does the rocker look on the other valve that the same guide plate positions that pushrod.
71 Malibu, Cottonwood Green, 396 BBC, AutoGear M22W 4 speed, 12 bolt 3:55 posi.
HKalin is offline
Quote Quick Reply
post #15 of 35 (permalink) Old Feb 8th, 20, 9:52 AM
427L88
Gold Member


Join Date: Sep 2000
Location: Buffalo NY
Posts: 15,095
Re: BBC valve train troubles
You know... I was ALMOST going to say the same thing, but not having enough experience, I hesitated only say " alot I dont like to see".

The pro is spot on. Pull 'em both. to me, a non pro, I don't like not knowing. You pull them off, and freshen them up, then you know its 100%. PS have you done a compression test yet? Not required, just asking.

Yeah, the Lisle is on "on head" compressor. I use it with a mag tipped machinists scribe to catch the locks. IT's MUCH easier to disassemble when they're up on their sides; and you can use a big C clamp compressor. And let the lock fall on the bench!

Not a bad thing. A bad thing would have been to plug all your EFI stuff on, and then have a poor running engine due to the valves. Which may have caused an undue amount of "failed tuning" on the EFi. Now THAT would suck bad. This dont.

PS, I found postioning the guide plates one of the least precise " sort of move it around until it fits" steps in head assembly. I did have to use Comp adjustable plates, with sort of bend in the middle allowing a better fit. Not on all the valve sets, but on a few. Once we had them set, I didn't use their set screw; I had junior weld them in that position. Log story short; I set them in loosely and wiggled them about and "eyeballed" the alignments until the pushrods centered on the valve stems.

Now that I've admitted what an amatuer I am, a pro may correct that procedure.

and do read up on rocker arm geometry. There is a thread going on now. VERY important on our BBCs.
Gene
ACES 3112/Team Chevelle Gold #62
Be big, be a 'builder'!
427L88 is offline
Quote Quick Reply