Join Date: Jan 2018
Location: Richmond, TX
Posts: 58
Re: 69 Malibu 250 Build
Quote:
Originally Posted by f6john View Post
How about that front suspension? Have you nailed down the plan for that?
The suspension is going to be either a UMI stage 3 set up or something similar from SC&C. I want to check out a few more cars in person though before I decide how much low I want.
HoustonBorn is offline
Quote Quick Reply
post #18 of 40 (permalink) Old Mar 6th, 18, 10:37 AM
echristie
Lifetime Premium Member


Join Date: May 2002
Location: Richmond, Texas
Posts: 847
Re: 69 Malibu 250 Build
Quote:
Originally Posted by cuisinartvette View Post
With ya on the ls appearance thing. The plastic intakes are actually real good but my god that whole engine...coils brackets etc are godawful ugly I dont care howmuch chrome one throws at it

I bet that carbed 376 could look decent!

Sure wish I could find a reasonable 6.0 that would work with my 02 1500/4l60e. Guys want a fortune for a worn out piece with 200k. THey are nice but not gold plated
cuisinartvette,
Keep an eye on facebook and facebook sales groups. I saw one locally here in SW Houston that was complete for $200. The guy said it wasn't running. There are some deals out there. Pick a part places are also good sources. If the recycler can save the cost to pull it, then they sell them cheaper.


Join Date: May 2002
Location: Richmond, Texas
Posts: 847
Re: 69 Malibu 250 Build
Quote:
Originally Posted by HoustonBorn View Post
Haha. Thanks Eric. Those are the exact two shops I called. Both very friendly, but both have a bit of a long line. Harold's would be great since he's about 2 minutes from my house so I may just work on some other stuff while I wait for him to be ready. There's no shortage of work to be done, I'm just anxious to get something in there and running.

Sent from my Pixel 2 using Tapatalk
Interesting. My first choice would still be Jeff. He's done a lot of work for me, but I was never in a rush. Harold has only done small jobs for me. Polished a crank, cleaned heads and removed a broken exhaust bolt, and a few other machine related projects.

Join Date: Jan 2018
Location: Richmond, TX
Posts: 58
Re: 69 Malibu 250 Build
Quote:
Originally Posted by 69Chvll View Post
Sorry to hear the motor turned out to be crap. Can you let me know what the part number is for replacing the interior rear window molding? I see yours is off, not sure if you have the original laying around. When I had my car repainted 14 years ago the rear package tray had to be replaced. The guy liked chevelles and did it for $200 bucks. I still dont have the molding though.


Sent from my iPhone using Tapatalk
Not sure I know which part you are looking for. The only thing I removed was the two little corner pieces.


Join Date: Jul 2016
Location: Roseville, CA
Posts: 1,044
Re: 69 Malibu 250 Build
Quote:
Originally Posted by HoustonBorn View Post
Not sure I know which part you are looking for. The only thing I removed was the two little corner pieces.

Sent from my Pixel 2 using Tapatalk


Hmm I do have those. Maybe there isnt any molding for that area?

Join Date: Jan 2018
Location: Richmond, TX
Posts: 58
Re: 69 Malibu 250 Build
I decided to go ahead and get the UMI kit so I was waiting on the parts to arrive so I could knock out that and the brakes at the same time. Brakes are going to be 4 wheel disc with a booster, running all new lines while Im at it.

Initially I was a little bummed because the suspension wasnt supposed to be here until Monday which meant I wouldnt be able to do anything over the weekend. Well, Saturday afternoon I came home to 4 beautiful UMI boxes, I was pretty stoked! I spent most of my available time on Saturday inventorying all my parts and getting the garage organized. I didnt have a lot of time to work today, but I got the car on stands and started tackling the front suspension. Right now Im ready to pull the lower control arms and start getting new stuff on there. But its late and I need to use the impact which is a no-no after bedtime. I think Im going to play hooky tomorrow and see how much I can knock out. I can already see that the brake lines are going to take me a little while.

I did make one mistake already. After talking with echristie i was going to do before and after measurements to see how much drop I actually see with the 1 springs. Well, I made a spot in my notes for the measurements but then got a little excited and completely forgot. Oh well. Id did get a good side shot right before I started so hopefully Ill be able to see the difference.
HoustonBorn is offline
Quote Quick Reply
post #23 of 40 (permalink) Old Mar 19th, 18, 11:03 AM
Nothingbut69
Tech Team

Join Date: Jan 2018
Location: Richmond, TX
Posts: 58
Re: 69 Malibu 250 Build
As requested Ill catch up on some photos here. I got a bit sidetracked today when I broke my 3/4 socket which is used on about half the bolts in the front suspension. Wasn't the tool's fault though, I was using a chrome socket on my electric impact. I tried using wrenches which was a waste of time so one new socket later and everything zipped off real quick like. As of right now I have the front dissembled and nearly ready for the new parts. I decided to put some POR on the frame around the control arms since I wont be able to reach it after. I plan on doing the rest of the frame when I pull the motor and replace the body mounts.

As promised, here are some pics of the last couple days.

This is my before shot of the cars stance. We will see where it is after the new parts and few days to settle. 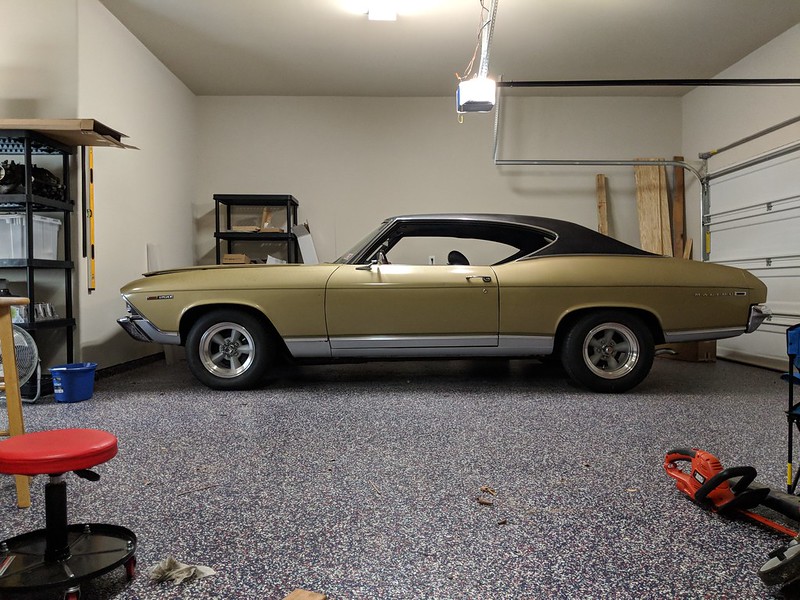 All my new suspension goodies. 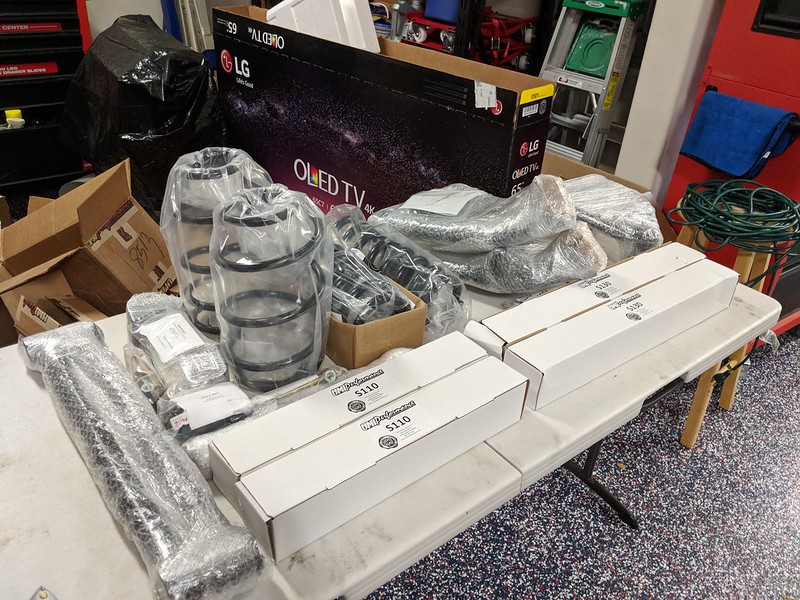 And some progress pics. The new springs are 530 lb/in which feels like its about 525 lb/in more than the stockers, lol. I"m curious to see what the difference will be once I'm done. 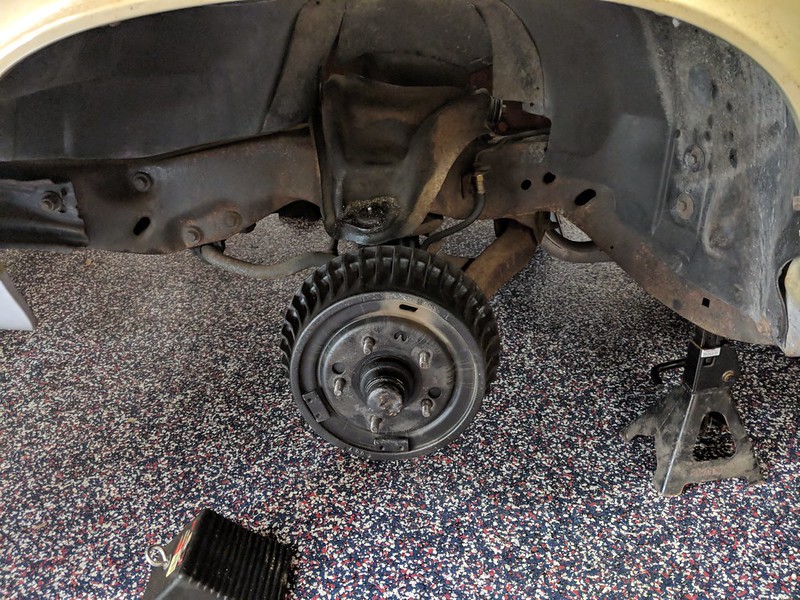 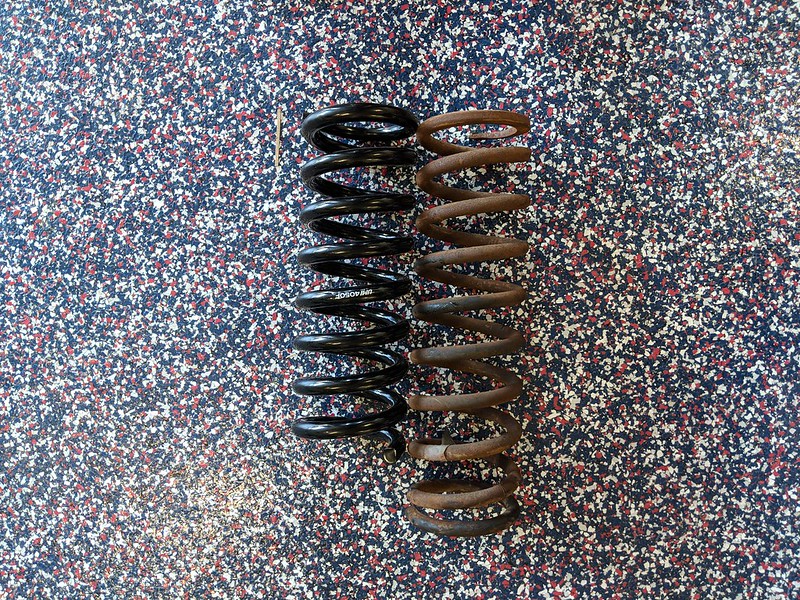 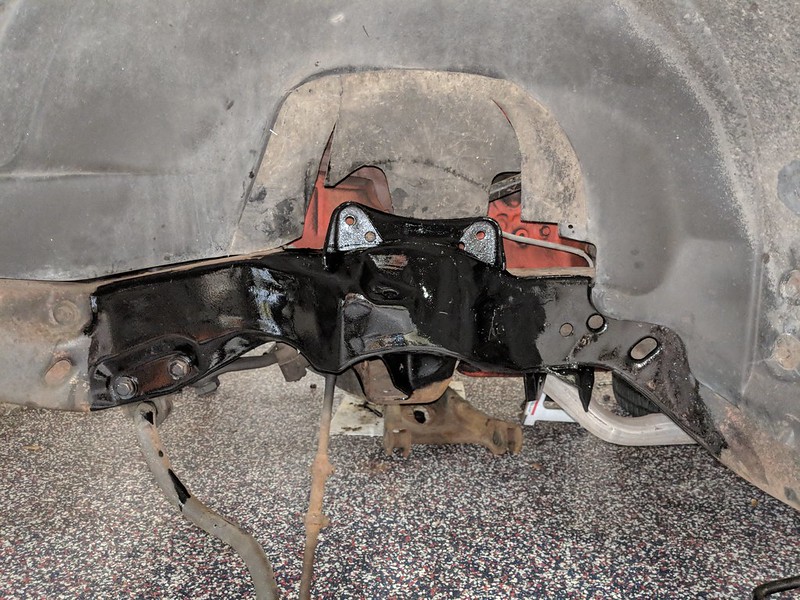 Join Date: Jan 2018
Location: Richmond, TX
Posts: 58
Re: 69 Malibu 250 Build
Well this is odd. I wanted to get some of the suspension pieces mocked up to make sure all the parts are fitting properly. The driver's side lower was a real SOB to get in there but I managed to get it lined up eventually. I went ahead and loosely fitted the upper arm as well as the spindle. Nothing is torqued down and the spring is not in there, but the spindle is noticeably crooked. I did test fit the passenger lower arm as well and it slid in with no trouble so I'm wondering if I have either an arm that out of whack or a frame that is. Any thoughts from the followers?

Tomorrow night I'll do the same for the passenger side and see if its at the same angle. For now here's a pic of what I'm talking about. I know its difficult to gauge level since the car is on stands, but you can see the ball joint angles a little bit. 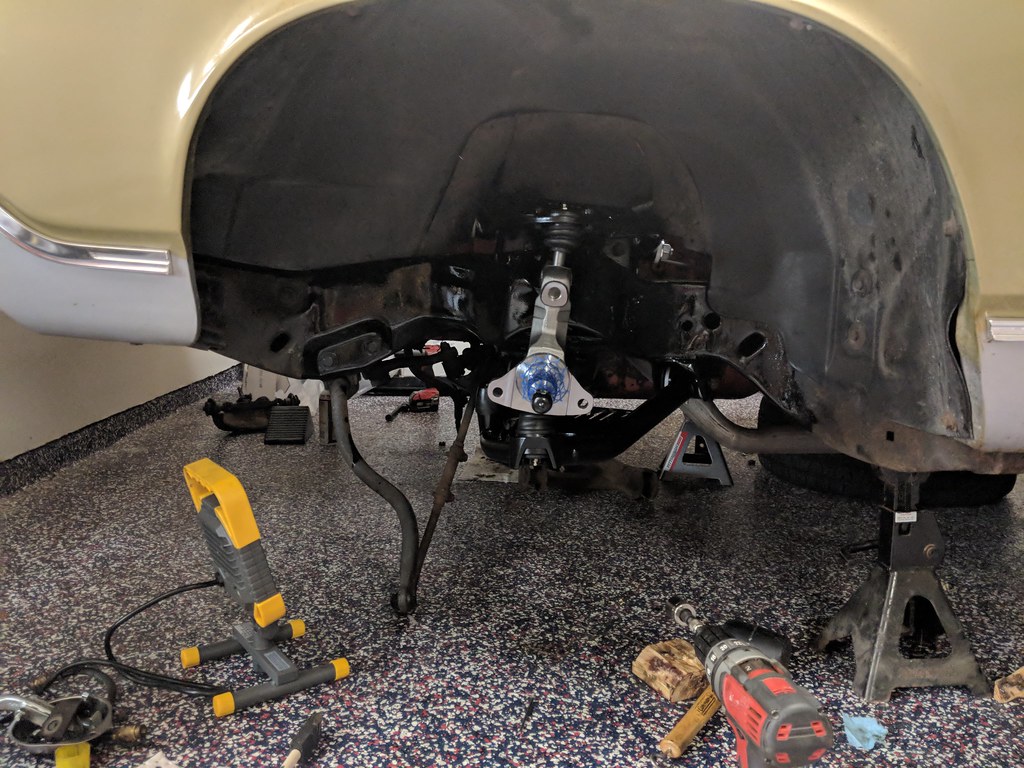 
Join Date: May 2002
Location: Richmond, Texas
Posts: 847
Re: 69 Malibu 250 Build
Quote:
Originally Posted by RAMBO View Post
I might be wrong, but that is the extra built in caster you are seeing, which is a good thing.

I will post up some pics of mine. I only took a few before shots and did the same thing as J-man. I forgot to take before measurements. Oh well.....
Eric Christie

Join Date: Jan 2018
Location: Richmond, TX
Posts: 58
Re: 69 Malibu 250 Build
The caster thing makes sense, just seems like a lot. And since I had so much trouble getting that arm in there I was a little more alert to possible problems. I think the passenger side will give me a good idea of what normal looks like since that arm slides in and out perfectly.